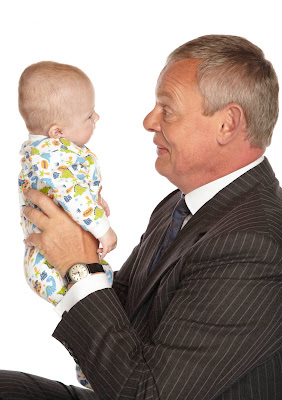 PC Joe Penhale is desperate to keep Maggie and show her he’s changed; that he’s the macho husband she wants. But once she has the all clear from the doctor, Maggie plans to return to Bude.

Penhale resorts to desperate measures to convince her to stay, including surreptitiously paying people to be nasty to her so he can step in and assert his authority, and show her he can be tough. His subterfuge almost works. But a final effort at bravado in trying to climb a ladder to rescue school caretaker Mr Coley (Brian Pettifer) from the roof fails miserably. When he is frozen with fear half way up the ladder, Maggie is very disappointed, and Penhale knows he has blown it with her.

Mr Coley has become increasingly muddled, and has put the children at risk by spraying poisonous fertiliser. He becomes so confused that he decides to climb onto the school roof, and doesn’t know why he’s there. Seeing Mr Coley swaying precariously on the roof, Dr Martin Ellingham bravely scales the ladder to rescue him. The root of Mr Coley’s problem lies in his potting shed where a paraffin heater has been giving off toxic fumes.

Aunt Ruth uncovers a chest of family heirlooms when she clears out a barn at the farm, including photos as Martin as a six year old schoolboy. The photos bring back poignant memories of an unhappy childhood for Martin.

It prompts Martin to think of registering James Henry for boarding school. But Louisa is horrified at the thought of sending their son miles away to school.

Tension is mounting between Louisa and Martin. They can’t seem to agree on anything, from the schooling for their son, to what to cook for supper. The final straw for Louisa comes when she discovers Martin has set a date for their baby’s christening without even consulting her. Louisa decides she has had enough. She packs a bag, and takes the baby back home to her mum.
Posted by Hod at 6:25 PM