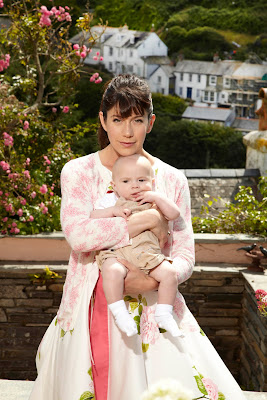 PC Joe Penhale (John Marquez) has an unexpected visitor- his ex wife Maggie (Julie Graham). She appears to have completely forgotten that they split up a couple of years ago.

When he tries to tell her they are no longer married she accuses him of over-reacting, and wants to know why he packed his bags and left her.

Joe struggles with a mixture of distress and elation at seeing Maggie again. He has thought about her every day since they parted.

He realises she is clearly not well, especially when she tells him she thinks it is April 2008, and that she woke up to find him gone, when she has actually been living with another man since their split. He tries discreetly to ask Dr Ellingham about her symptoms without telling him that he is talking about his ex wife.

Joe is terrified of losing Maggie again, and wants to make the most of every moment of being back together. He arranges a romantic evening for them at the local restaurant, Large’s, only to find Dr Ellingham and Louisa there. When Louisa invites Joe and Maggie to join them, the doctor quickly spots that Maggie has a problem, and is showing symptoms of transient global amnesia. He tells Joe and Maggie he will arrange urgent brain scans for her to determine the diagnosis. For Joe his hopes of their marriage working again are dashed.

It looks as if romance may be in the air for Louisa’s mother Eleanor. She meets an old school friend, Paul (John Duttine), a local fisherman who takes her out on a date.

But the relationship is strictly business, as Louisa discovers when Paul collapses on his boat and falls overboard. Paul has stopped breathing and the doctor has to give mouth to mouth to resuscitate him. Eleanor shows such a lack of compassion for the poor man’s condition she is forced to explain to her daughter that she’d struck a deal with a Spanish company to supply seafood, and Paul has been working all hours to meet the demand.

Morwenna arrives at work with blood dripping from her foot after standing on a nail. The doctor grimaces at the sight of the blood and fights the nausea rising in his throat as he treats the wound. He is about to give Morwenna a tetanus injection when she disappears from the surgery. She confesses she’s scared of needles.

Martin and Louisa’s baby still doesn’t have a name, and PC Penhale warns them that time is running out. If they don’t register a name for the baby soon the State will step in and name the baby. After protracted discussions the couple finally reaches an agreement; their baby son is named James Henry.
Posted by Hod at 6:30 PM