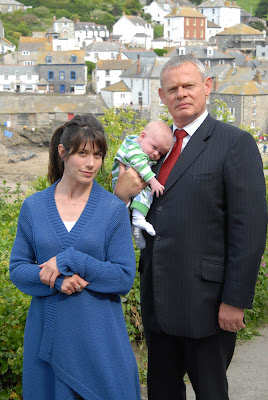 Fuelled by a cocktail of drugs Mrs Tishell can no longer hide her unrequieted love for the doc, and decides she must take drastic action. Her husband Clive (Malcolm Storry) arrives back unexpectedly from his work on the oil rigs announcing his intention to retire so they can spend more time together.

It’s now or never for Mrs Tishell to make her romantic notions of a relationship with the doc come true. With baby James Henry in her care, she boards a bus out of the village leaving an enigmatic message for Dr Ellingham to meet them at the castle.

Her husband Clive is furious to think his wife has been having an affair with the doc. But Dr Ellingham doesn’t have time to worry about Mr Tishell’s fury. He has to find his baby.

Dr Ellingham is joined by Louisa, who is beside herself with worry, and his Aunt Ruth, as they go off in search of Mrs Tishell. PC Penhale is called in; he can barely contain his excitement at having a real crime to deal with.

They race to the Castle Hotel where they think Mrs Tishell is, but there’s no sign of her. Mrs Tishell then phones him, but refuses to say where she is. All she will say is that he sent a couple to her to tell her where to meet him.

Martin guesses she is referring to a honeymoon couple who had sought treatment from him earlier in the day. A hasty call to Morwenna reveals the couple were staying at Pentire Castle, a magnificent house perched high on a cliff edge with spectacular views of the sea. The perfect romantic rendezvous.

Mrs Tishell is watching from a window high up in the castle when Martin arrives. With the baby in her arms she looks perilously close to jumping out of the window.

With her background as a psychologist Aunt Ruth urges her nephew to stay calm, and not do or say anything to make Mrs Tishell do anything dangerous. With Louisa urging him to pretend he does love Mrs Tishell, Martin launches into a heartfelt appeal to Mrs Tishell about how he can’t leave the village because of her, he loves her, and begs her for another chance.

It is soon apparent that his words were not meant for Mrs Tishell at all, and that he was actually directing them to Louisa. But Mrs Tishell falls for it and rushes to kiss him. He snatches the baby from her, leaving her shocked to see Louisa and Ruth beside him.

PC Penhale who has been trying to scale the wall to try out his negotiating tactics on Mrs Tishell, eventually arrives to arrest her. But Aunt Ruth insists Mrs Tishell needs psychological help, and gently leads her away.
Posted by Hod at 6:15 PM