They are filming today. Together with mini-MM's rush down to harbour. Film crew are setting up and, joy of joys, Martin Clunes is there. Pluck up courage and accost him. Ask to take photo of him and mini-MM's. MC far too kind to say no to children (even teenagers), so get photo. My request opens floodgates and MC is mobbed with requests for pics - oops. Fade to discreet distance and try to take more pictures but other people keep getting in the way. One woman asks MC for a hug and gets one - brazen hussy! Why didn't I think of that? Mini-MM's notice speculative look in my eyes and threaten to never leave home if I don't behave so forced to abandon thought of hussy-like behaviour. 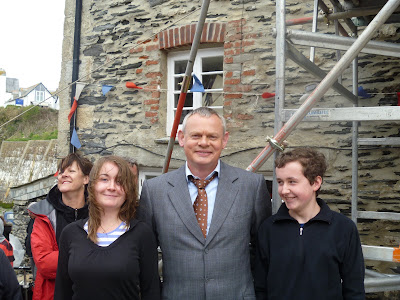 Attempts to take perfect picture of MC foiled by rehearsal. Find out from crew that no other cast members except John Marquez are expected and, very bad news, no further filming in Port Isaac until Thursday at the earliest!

Return after lunch and take more pics of MC along with an assortment of random strangers. John Marquez arrives in his police uniform. Much more attractive in person. Take a couple of pics and get my pic taken with him. See stunt. Temperature plummets and mini-MM's plead starvation. Send them to chip shop, but reluctantly admit defeat and head back to cottage.
Posted by Hod at 8:47 AM