Word on the Street...

With ratings topping nine million viewers for the series screened in Autumn 2009, Doc Martin is considered one of ITV’s most successful drama series.

After a two year break to allow Martin to pursue other drama and factual projects, he is back to reprise the role of the curmudgeonly GP in the picturesque fictional village of Portwenn.

Eight 60 minute episodes will be filmed around the stunning settings of the North Cornwall coast.

They are joined by a prestigious line up of guest stars including Julie Graham (Survivors, Bonekickers, William and Mary), Peter Vaughan (Silk, Lark Rise to Candleford, Christmas at the Riviera), Joanna Scanlan (Getting On, The Thick of It), Robert Daws (Coronation Street, The Royal) and Louise Jameson (Doctors, The Bill).

Martin says: “I have missed our annual visits to Cornwall, and I look forward to spending the next few months in this beautiful part of the country. I am thrilled to be able to work with such a fabulous cast, and exciting new story lines.

The series is produced for ITV1 by Buffalo Pictures, the independent production company owned by Martin and his wife Philippa Braithwaite (Staggered, Sliding Doors, Hunting Venus), who also produces the series.

“We’re delighted so many viewers enjoy the series, as much as we enjoy filming and producing Doc Martin with the beautiful backdrop of Cornwall. Our vision is to ensure this series continues to be as fresh, different and bold as when we first went into production,” said Philippa.

The new series begins with Dr Martin Ellingham struggling to cope with new fatherhood, as he embarks on a new chapter of his career, which is set to take him away from the small Cornish village.

A new GP, Dr Di Dibbs (Joanna Scanlan), and her husband Gavin (Robert Daws), have already moved into his old surgery. But Dr Ellingham begins to have serious doubts about the competence of Dr Dibbs, and, in his familiar tactless way, is not afraid to tell her.

The doctor also faces the loss of his Aunt Joan, and has to deal with an equally cantankerous relative who comes to live in Portwenn.

Doc Martin is produced for ITV1 by Buffalo Pictures in association with Homerun Productions. 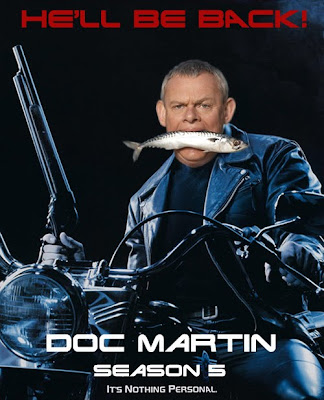