The new series of the well-loved comedy drama continues with an episode in which Martin (Martin Clunes) finds himself dealing with the death of Aunt Joan, the demands of fatherhood and the arrival of his Aunt Ruth (Eileen Atkins). Also starring Caroline Catz, Ian McNeice and Joe Absolom.

After the departure of Dr Dibbs, Martin agrees to return to the surgery until a replacement can be found. Meanwhile, he is determined to get to grips with life as a father, and he asks Louisa (Catz) to move in with him so that he can help raise their baby – even suggesting that they could all move to London. Louisa reluctantly agrees to move in and also offers to help out on reception at the surgery. But she is unconvinced about moving to London, because she had hoped to resume her career as headmistress of the village school. 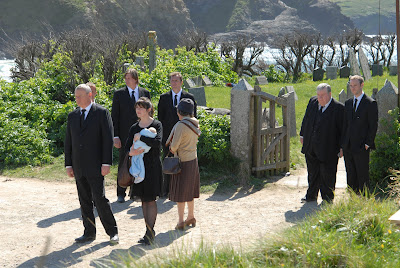 The local church is packed for Aunt Joan’s funeral, but the villagers are shocked when Martin’s eulogy turns into a health warning. Joan’s sister Ruth arrives for the service and shows that she and the curmudgeonly Martin may have a few things in common. Joan has left her the house and farm, but she is none too keen on the idea of staying in Portwenn.

Source: ITV Highlights and Schedule
Tipster: Lambs
Posted by Hod at 8:38 AM