A final visit of the day to Port Isaac. What seemed like a quiet but picturesque fishing port suddenly came to life as I turned a corner and found a TV production in full swing. I had to ask, and was told "Doc Martin" which I have never seen, and sounds as if it ought to be set in Northampton. However a quick Wikipedia search on my phone filled in the background. The scene in question appeared to be set in a building masquerading as the pharmacy, and after a short while, Martin Clunes emerged between takes to sign a few autographs. Meanwhile, at the nearby lifeboat station and beach, the Cornish male voice singers "Fisherman's Friends" (http://www.fishermansfriendsportisaac.co.uk/) were setting up, presumably to sing later as part of the TV filming. An interesting diversion anyway, and I suppose I'll have to watch now! 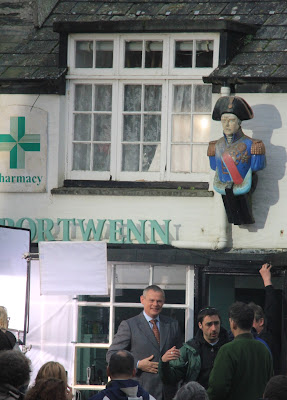