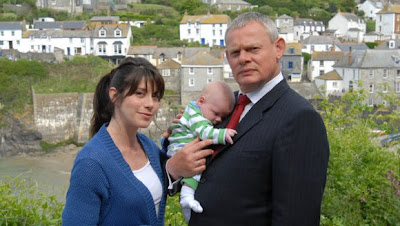 Another biggish guest star arrives: Julie Graham memorably spent three years as Martin Clunes’s screen wife in William and Mary, and here they are again, reunited. Except they’re not quite, because in Doc Martin, Graham plays the wife of PC Penhale (John Marquez). That’s odd, considering we didn’t know he was married. It’s even odder that his wife thinks he’s only just arrived in Portwenn.

As for the Doc himself, an episode full of the customary, satisfying sight of him being rude to people who fully deserve it has a glimpse of warmth at the end. That it’s hard-won makes it all the more affecting — Clunes is brilliant at letting those little flickers shine through.

PC Penhale is shocked by the unexpected arrival of his ex-wife Maggie (Julie Graham), who appears to have forgotten that they separated years ago and wants to know why he left her. Eleanor goes on a date with local fisherman Paul Hale, an old friend she has not seen since school, while Martin and Louisa finally agree on a name for their baby - James Henry. With Martin Clunes, John Marquez and Caroline Catz.

The original article can be found HERE.