Making a Portwenn house call to the set of Doc Martin...

Patients of Dr. Martin Ellingham finally received word this week that the new season of Doc Martin will begin on Monday, 12 September, in the UK (ITV). In the States, on public television, we can now, with virtual certainty, announce that Dr. Martin Ellingham will resume making house calls in Portwenn beginning in April 2012.

Recently, Eric Luskin, Vice President of Syndication and Premium Service for American Public Television (where KERA and other public television stations acquire the broadcast rights to Doc Martin), suffered at great length on behalf of all tellyspotting readers on both sides of the pond to file this report and give us a brief glimpse of what it was like on the set as filming concluded in the town of Port Isaac earlier this summer. 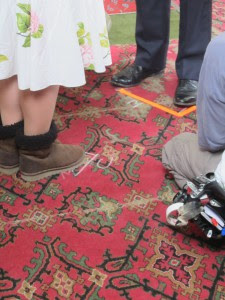