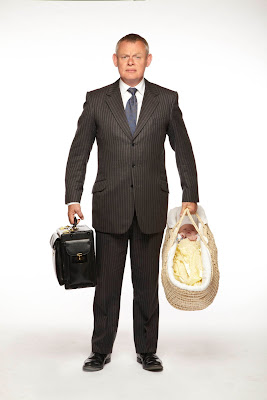 Sleepless nights are taking their toll on Dr Martin Ellingham and Louisa Glasson. Tempers are frayed as they try to find ways to comfort their constantly wailing baby.

Just as they manage to get him off to sleep, Buddy, the dog who thinks Martin is his best pal, barks and wakes the baby. Exasperated Martin scoops up the little dog and takes him to Aunt Ruth.

Aunt Ruth has problems of her own: She is dealing with an intruder on the farm who has stolen the hub caps from her car. The thief is identified as Michael Dunwich (Andrew Lee Potts), who lives with his mother Shirley (Miriam Margolyes) on a neighbouring farm.

She decides to pay a visit to mother and son. As a psychiatrist it soon becomes clear to Ruth that Michael is a bit odd. He has a collection of metal objects strewn around the garden. Ruth catches him taking pot shots at her hubcaps.

Shirley makes an appointment with Martin to discuss the crippling stomach pains she has been suffering. When her son is out of the room, Shirley tells the doc she thinks her son is trying to poison her so he can have the house to himself.

New receptionist Morwenna Newcross (Jessica Ransom) fails to make a good impression on the doc by arriving late on her first day. Her grandfather William (Peter Vaughan) gives her some ‘magic pills’ to make sure she is on time, and bright as a button at work.

The pills make Morwenna hyperactive and the doc sacks her alleging she is high on drugs.

It is only when William collapses with a suspected heart attack that the doc discovers the ‘magic pills’ he and his granddaughter have been taking are actually methamphetamines which were given to soldiers during the war to keep them alert. William appeals to the doc to give Morwenna another chance.

The results of the tests on Shirley Dunwich show a heavy concentration of arsenic in her system. The doc immediately calls PC Penhale (John Marquez) suspecting that Shirley is actually being poisoned by her son. There’s a real crime for Penhale to deal with at last, but he seems less than confident about how to proceed.

When they arrive at the Dunwich farm they find Ruth trying to help Shirley, and Michael wielding a gun. The gun goes off and Penhale thinks he has been shot. It is the doc who manages to calm the situation and seize the gun.

Martin also notices the odour from old wallpaper in the house. He realises the copper arsenate from the old wallpaper which Michael had started to strip had produced deadly fumes and caused Shirley’s illness.
Posted by Hod at 6:40 PM