Cheaper by the dozen...

The following article is taken from "This is Cornwall". The original can be found HERE.

Martin Clunes will grace television screens again this winter as the new series of Doc Martin returns – this time with a full brood.

The former Men Behaving Badly star returns to his title role as the loveable grumpy doctor of the fictional Westcountry village Portwenn. 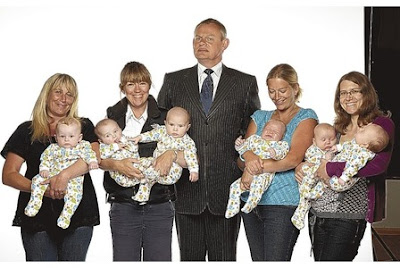 The new series begins with the doctor struggling to cope with fatherhood as he embarks on the next part of his career, which is due to take him away from the small Cornish village. While filming for the new series, in and around Port Isaac, Clunes had to rediscover his paternal side as he cuddled, rocked and burped no less than 12 different babies as his character adjusted to life as a father.

"Having babies around took me back to when my daughter Emily was born," he said.

"At this stage they're adorable – you can strap them in and they just gurgle and smile. When they stopped I handed them back. I wasn't charged with getting them to sleep, feeding or changing them so it was great – they were just like props, albeit very cute ones – and when one was broken I gave it back."

Although the Dorset-based actor isn't as new to fatherhood as his character, the four-and-a-half-months of filming with 12 different babies was not without its problems.

He said: "There's a scene on Bodmin Moor where I fall asleep in the car with the baby, only to be woken up by a farmer roaring a Land Rover.

"We shot my reaction and then set up the lights and cameras on the baby and tried to wake him up. But he was sparko. I whispered his name, shook the seat, turned on the radio, but nothing stirred him. We tried everything short of slapping him round the face. In the end I had to hold his nose, but I can assure you no babies were harmed during filming," said Clunes.

The series is due to screen in September. 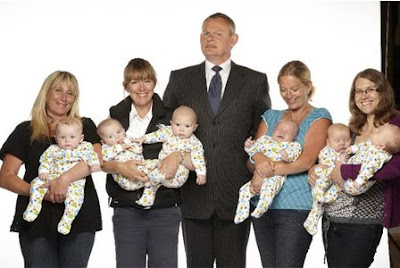