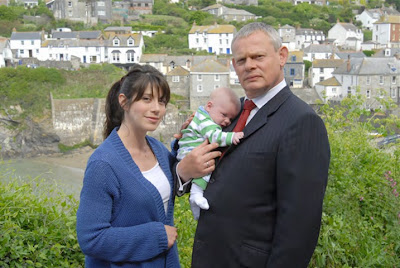 ITV's Season Highlights for Summer includes the following information about Doc Martin (the original can be found HERE):

Martin Clunes is back for a brand new series of the hit ITV1 drama Doc Martin. After a two year break to pursue other drama and factual projects, Martin returns to reprise the role of the curmudgeonly GP in the picturesque fictional village of Portwenn.

In this new series, the doctor is up to his eyes in nappies as he struggles to balance his work with being a new dad, which does nothing to improve his unsympathetic bedside manner with patients.

Doc Martin is one of ITV’s most successful drama series, with ratings topping nine million viewers for the series screened in Autumn 2009. 8 x 60 minute episodes are being filmed this spring and summer around stunning locations on the North Cornwall
coast.

Caroline Catz (Murder in Suburbia, The Vice) stars as school headmistress Louisa Glasson, the doctor’s onoff partner and mother of his child. Ian McNeice (Dr Who, Frankenstein) and Joe Absolom (Vincent, EastEnders) are back as father and son Bert and Al Large, who run a restaurant in Portwenn. John Marquez (Hotel Babylon) returns to his role as the village policeman, and Selina Cadell (Life of Riley, Lab Rats) plays pharmacist Mrs Tishell, who has a crush on the doc. Dame Eileen Atkins (Upstairs Downstairs) joins the regular cast as the doctor’s Aunt Ruth, and Jessica
Ransom (The Armstrong and Miller Show) is new surgery receptionist Morwenna Newcross.
Martin is reunited with Julie Graham (Survivors, Bonekickers), his co-star in ITV1’s popular romantic drama William and Mary, for this new series. She is among the prestigious line-up of guest stars, which includes Peter Vaughan (Silk, Lark Rise to
Candleford), Joanna Scanlan (Getting On, The Thick of It), Robert Daws (Coronation Street, The Royal) and Louise Jameson (EastEnders, Doctor Who), who plays Louisa’s mother.

The producer is Philippa Braithwaite and the director is Ben Bolt. A Buffalo Pictures production.