First, they filmed Dr. Dibbs, standing in front of the surgery looking at PW. Penhale jogs by and they chat and he opens both arms and yells "Welcome to Portwenn".

DM, Dr. Dibbs and Mr. Dibbs were arguing at the back of the surgery and she ran around to front saying something like "leave me alone". DM yells at her that she's going to collapse, which she does. DM runs over to her and starts checking her out and finds "wounds" on her side (the phrase the makeup person who had to touch them up all afternoon used). Mr. D goes inside the surgery and fetches a medical bag. the patients inside follow him out (alot of extras from the Plat scene in S4E8). We could here Mr D say, "you'll need surgery love". While this is going on, Penhale, comes up the road carrying BE and asks what happened. DM tells him to call an ambulance. LG comes running up the road in a panic and yelling "Joe" and grabs BE from him. (guessing he was holding the baby and then wandered off to see what happened and didn't tell LG). She then notices what's going on and watches while he's on his mobile. They both suddenly looked down the hill and DM asks if Penhale canceled the fisherman's ambulance. Penhale jogs down the hill to meet it.

Later, they filmed Dr. D and Mr. D being put in the ambulance and it drives off. DM and LG stand in the road and talk and then they start to walk down the hill towards town. One of the patients who has his arm in a sling yells "doc" and says something about his arm. DM looks at him and then looks at LG and goes over. He feels the arm and then says "follow me' and he and the rest of the patients all go in the surgery. LG stares after them for a few seconds holding BE and then follows them in.

Friday morning, they filmed DM and LG walking up the hill towards the surgery. He was carrying 2 big suitcases and she was pushing the pram and carrying a suitcase. The little dog was following them and as they tried to get into the surgery, DM starts yelling at the dog to go away. He then does this little dance of trying to push the dog away while holding these 2 bags.

Then they took some publicity shots of the "family" and left to go film in someplace called Crackington Haven. (we sat with a PA all afternoon and he answered a lot of questions).

I can fill in that i guess this is how they get rid of the new doc. 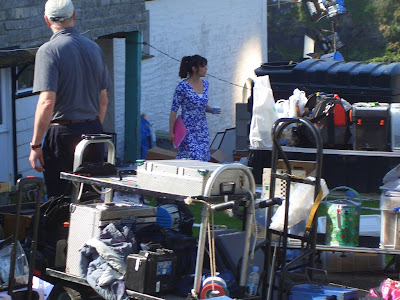 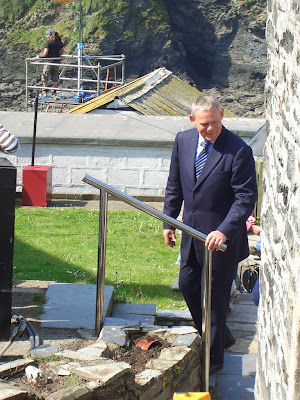 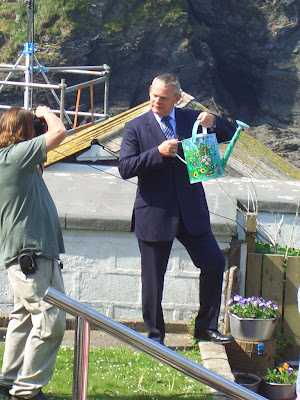 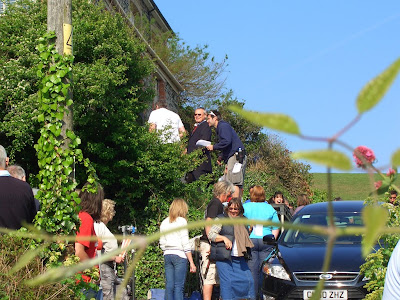 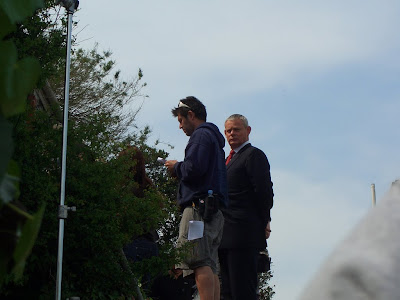 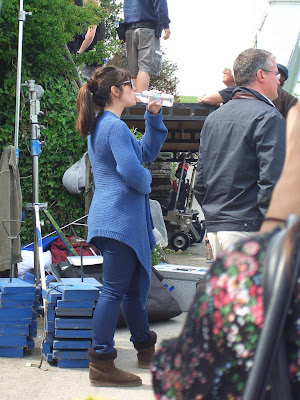 For more great photos and even a little video, visit mazzieblue's Flickr photostream.
Posted by Hod at 3:21 PM