Leannethemouse is in da house!

I saw Louisa pushing the pram down the hill with the surgery. She bumped into the actress who plays her mum and they have a chat about the baby. Louisa's mum had a flight case and looked tanned, so perhaps she's come straight from Spain or something. What struck me was the pram - its one of those old fashioned huge ones.

Also I saw Martin filming and he (the Doc) had rushed into the chemist with his case in one hand and a carry-Moses basket with BE in the other. Perhaps he was left looking after BE and had to be called out for a medical emergency. Anyway, he rushed in and out of the chemist, but on the way out he was also carrying nappies and a prescription (looks like Louisa has him under her thumb ;-)). What I noticed here was that when he bombarded out, Mrs T held the door open for him and lent against the glass door (longing over him I might add), while he walked out and towards the hill where the surgery is (the same one Louisa walked down), so perhaps they are at the surgery, I don't know. I have this filming of the scene on film.

So BE has a nice posh old fashioned pram, and gets carried around in a Moses basket - it's very old fashioned, and neither of which are cheap.

The final scene I saw them filming was a convoy of speeding vehicles, led by PC Penhale (with lights flashing), behind were Bert and Al in their van, and .... an Auntie Joan DOUBLE. This lady was just driving the blue 4X4 in the convoy, but I noticed that it was a lot cleaner than earlier, when I saw a few crew members cleaning huge mud splats off the 4X4. Behind AJD was a range of other cars that I didn't recognise, so perhaps just extras, but there was about 5 cars in this speeding convoy through the village. This is all I know, let the speculation begin!

I hope this helps other people like me with Doc Martinus. :-D 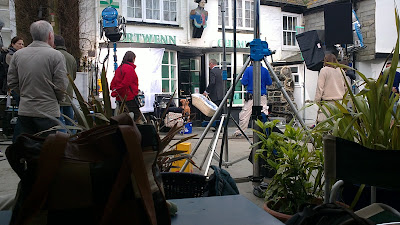 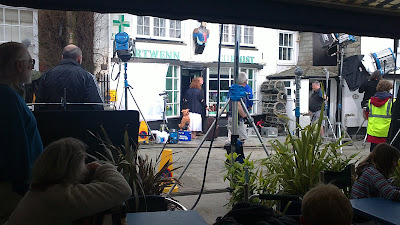